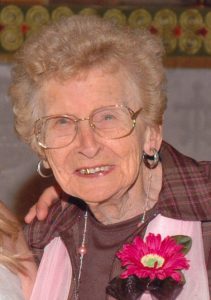 She was born February 18, 1921, the daughter of Ralph and Emma (Vollmer) Rahn in Douglas County and was a life- long resident of Douglas County.  She married Seth Dallas in 1939, he preceded her in death in 1974 and together they raised four children:  Sharon Allen of Tuscola, Alice (Jerry) Johnson of Arthur, Becky (Gary) Kappes of Tuscola, and Scott Dallas of Tuscola.

She is also survived by her grandchildren:  Bruce Allen of Villa Grove, Candy (George) Crawford of Tuscola, Jason Eversole of Pesotum, Jeff Johnson of Arthur, Jeremy (Holly) Dallas of Mahomet, Jaleigh Johnson and husband: Tim Combes of Monticello, Sarah Vogel of Tuscola, and Melinda (Dustin) Marmion of Hamilton.  She was also blessed with 9 great- grandchildren and 7 great-great grandchildren.  She is also survived by one brother-in-law: Jim (Helen) Dallas.

She was preceded in death by her parents, her spouse, infant son, one son-in-law: Larry Allen, two brothers: Walt and Wayne Rahn and two sisters: Opal and Ruth Reifsteck, one granddaughter: DeDe Eversole, and a great grandson: Skylar Vogel.

Alberta and her husband farmed in the Douglas County area for over 21 years.  After they retired from farming they started the Dixie Cream Donut Shop in Tuscola which she owned and operated for 33 years.  This truly was a family business and she was fortunate to work with her children, many of her grandchildren and great-grandchildren in the Donut shop.  She also made many friendships that lasted her lifetime.

Alberta’s greatest joy was spending time and celebrating with her family.  She was extremely proud of each and every member.

She was a lifelong member of Immanuel Lutheran Church in Tuscola.

Memorial donations may be made to Immanuel Lutheran Church in Tuscola.