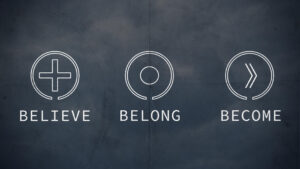 We BELIEVE that Jesus Christ purchased and won us from sin, death, and the devil with His own blood. Therefore, we BELONG to Him and in Him we belong to one another, so that we BECOME like Him as we mature in faith toward God and fervent love toward one another.

What does God teach and do in the Law? In the Law, God commands good works of thought, word, and deed and condemns and punishes sin.

What does God teach and do in the Gospel? In the Gospel, the good news of our salvation in Jesus Christ, God gives forgiveness, faith, life, and the power to please Him with good works.

Pray for kings and those in authority (1 Timothy 2:2)

Pray for the Gospel to spread among all peoples (Matthew 9:37–38)

Thursday, January 26 is the Commemoration of St. Titus, the recipient of St. Paul’s Letter to Titus. Here is a summary of the Book of Titus, which we studied during Advent Midweek services this year.

When you see an “Out of Order” sign posted, you know that something doesn’t work. It’s broken. It could be that it simply needs a new part or component, and supplying it puts things back into working order. It could be that it needs to be filled with something—fuel or lubricant for an engine or product for a vending machine—and supplying that which is lacking puts it back into working order. In this way, out of order indicates a static and inactive thing. It’s broken, so it just sits there, until someone does something to fix it.

Rarely, however, do we think that an out-of-order sign indicates not only that the thing is not working but also that it is working against and contrary to how it should. We don’t think that the out-of-order vending machine will give us poison instead a healthful snack. We don’t think the engine is out of order in the sense that it is not only not doing it what is should be doing but that it is doing what it shouldn’t be doing in the opposite.

The blessed apostle sends Titus to Crete to put into order what is lacking among them (Titus 1:5). What is lacking is the order God instituted for His household (the Church); the households of fathers, mothers, and children (the Family); the household of the community (the Society). These are out of order. They are not working as they should. And more than that, they are working in a way that is contrary to how it is supposed to work. The things out of order aren’t static. They are not only not doing what they should be doing, but they are actively doing what they shouldn’t. They are contrary to the order that God has established.

Titus is sent to Crete to put into order what is lacking in the Church. It doesn’t have pastors (elders). Perhaps that isn’t quite right. It has pastors (elders) but they are not of the sort that are in working order within God’s appointed order. “They profess to know God, but they deny him by their works. They are detestable, disobedient, unfit for any good work” (Titus 1:16). Since they are out of order—disordered, insubordinate and not in submission to orders of God—they not only do not do what they ought (omission), they do what they ought not (commission). Titus must appoint pastors (elders) who are properly ordered toward the right things and against the wrong things so that the household of God (the Church) may not be lacking.

Titus is sent to Crete to put into order what is lacking in the Family (Titus 2). It has families but they are being torn apart by the false pastors in their midst. They are not being formed by pure doctrine. Right teaching gives birth to right living. For doctrine is life. It is wisdom. It is godly order. The families are to be rightly ordered toward the right things and against the wrong things. The men are to take their properly and divinely ordered place, just as are the women, and the children. Each in their own place according to God’s order, directed to the ends for which God created them and put them in that particular place.

Since the grace of God has appeared (our Lord’s coming in the flesh to re-establish that order) and is appearing again (our Lord’s second coming in glory) to save us from the disordered, insubordinate, disobedient people we once were and lives we once walked in, making us his own possession, putting into order what was out of order, so that we are zealous for good works. That is, so that we work once again, that what ought to be produced and come forth may be produced and come forth once again.

Titus is sent to Crete to put into order what is lacking in all of Cretan Society (Titus 3). Since the goodness and lovingkindness of God our Savior appeared, he saved us from the works that came from our being out of order, and he put us back into order. He reestablished his order among us. He justified us, made us right, put us into place. Not only did he put us under and in Him as His creatures, but He put us into His family. He gave us an inheritance, something to live in and for and something to pass on.

We are to be reminded of this, present tense, on-going reality. That we are reminded means that we have already been taught it. We are to take our place in the order that He has established because in this order is life. Outside of this order is death. Life is our inheritance in the order of God. This is what we are to live in and pass on. Living in this life is submission and obedience. From this arises good works (καλῶν ἔργων), works that are rightly ordered and properly arranged, works that are excellent (τὰ καλὰ) and profitable, working and fruitful.

Pay attention then to where you are in relation to where God has actually called you to be. Let us not profess to know God but deny him by our out-of-order works. Let us not let the word of God be reviled by our disobedience, insubordination, and disorder. Let us not condemn ourselves by living as warped and unfruitful people. Rather, let us take our place, be put into order, devoted to good works — the works he has prepared for us in our stations. That we would be where God put us, that we would watch over what God would have us watch over, that we would subordinate and obey what God calls us to submit to and obey. That no one would disregard us.