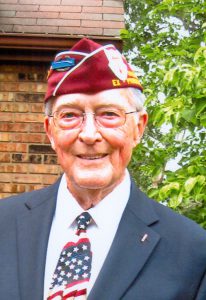 Funeral Services will be held at 11:00 a.m., Friday, April 7, 2017 at the Immanuel Lutheran Church, 600 East Northline Road, Tuscola, IL, with Pastor Jason Braaten officiating. Burial with military graveside rites will be held in the Tuscola TownshipCemetery.

A time of sharing with family and friends will be held 2 hours prior to the service at the church.

Roland was born on July 30, 1925 in Lincoln, Nebraska, the only son of first-generation German immigrants, John and Elisabeth Spomer. He married Sharon Cuppy Marler on May 2, 1970 in Tuscola. She survives.

Roland was preceded in death by his parents and sisters: Lydia Spomer, Ottilie Damm and Lily Sacha.

Roland’s strong faith in his Lord, Jesus Christ began early and carried through his lifetime. He attended Lutheran parochial school as a boy, and was a lifelong member of The Lutheran Church—Missouri Synod. He was a very active member of the Immanuel Lutheran Church, Tuscola, serving on the church board and teaching Sunday School for many years.

Roland proudly served in the U.S. Army during WWII in the European Theater of Operations with the 28th Division, 110th Infantry Regiment, participating in the Rhineland and Ardennes campaigns. He was captured by the German Army in December 1944 during the Battle of the Bulge and was held as an American POW until liberation in April 1945.

He graduated in 1950 from the University of Nebraska with a degree in Chemistry. He worked in Ohio, Kansas and Indiana before moving to Tuscola in 1956 to work as a chemist for National Petro Chemicals Company (later USI, then Quantum Chemicals). Roland retired in 1990 as Lab Superintendent, Polyethylene Division. Roland secured several chemistry-related patents during the course of his career.

Roland was an avid-golfer, had a keen sense of humor, and enjoyed reading, watching Nebraska football and rooting for his favorite team, the St. Louis Cardinals. Roland had a soft spot for animals, including several special family pets he held dear to his heart.

He belonged to local American Legion Post #27 and TK Martin VFW Post #10009, Veterans of the Battle of the Bulge, and American EX Prisoners of War. Roland was a member of the American Chemical Society and Kaskaskia Country Club for over 50 years.

In lieu of flowers, memorials are suggested to the Immanuel Lutheran Church or to the local American Legion or VFW Posts.