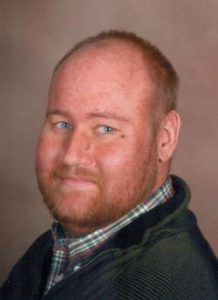 Joel Stephen Hilgendorf, 28, of Tuscola, IL, passed away at 11 a.m., Sunday, July 9, 2017 at his residence with his parents, brother and other family members by his side after a lengthy battle with leukemia and lung cancer.

Joel was born on May 22, 1989 in Urbana, IL, the son of Stephen P. and Paula Ann Wright Hilgendorf. On 28 May 1989, he received the gift of Holy Baptism and became a child of God. On 2 May 2004, he publicly confessed his faith and was confirmed and received the precious gift of the Lord’s life-giving body and blood. God blessed Joel’s life with many special people as he served God in his vocations at home, church, and in the community. Finally, on 9 July 2017, God blessed Joel with a holy death and took him to rest in the arms of Jesus to await the resurrection of the dead.

Survivors include his parents, brother: Jacob P. Hilgendorf of Tuscola and maternal grandmother: Irene Wright of Charleston. Many aunts, uncles and cousins.

He was preceded in death by his paternal grandparents, Dr. M.D. and Adeline Hilgendorf and maternal grandfather, Robert Wright.

Joel was a member of the Immanuel Lutheran Church. He remained very strong in his faith until the very end.

He was an avid hunter and fisherman, and he enjoyed woodworking.

Joel was very loved by all his family members and his many friends. He will be greatly missed by all and especially by his black lab, Benny.