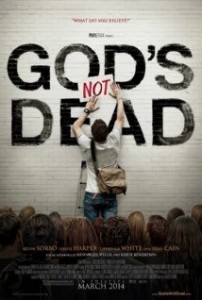 Freshman university student Josh Wheaton attends a philosophy class, where the uncompromising Professor Radisson requires all students to submit a signed statement that the “God is dead” and never existed. When Josh refuses due to his own Christian beliefs, the Professor challenges him to defend his position that his God is real – which leads to a series of confrontational presentations between himself and the professor, with the class as jury. Josh’s plans to go to law school depend on not failing this class. Josh’s fellow Christian girlfriend urges him not to throw away his future with this meaningless action of defiance. At the same time, Pastor Dave and African missionary Jude attempt to leave town on a trip, but are hindered by curious incidents. Student Ayisha is at odds with her father’s conservative Muslim religious principles. Hotshot businessman Mark acts cynically towards his mentally ill mother, while his famous leftist blogger girlfriend receives bad news from a doctor.