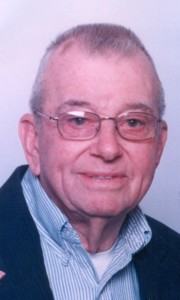 Funeral Services will be held at 11:00 a.m., Saturday, January 10, 2015 at the Immanuel Lutheran Church, 600 East Northline Road, Tuscola, IL, with Rev. Jason Braaten officiating. Visitation will be held from 9 a.m. to 11 a.m., Saturday at the church. Burial with military graveside rites accorded will be held at the Davis Memorial Cemetery, Pesotum, IL  Hilligoss Shrader Funeral Home, 705 South Main Street, Tuscola, IL is entrusted with the arrangements.

He was preceded in death by his parents, daughter: Elaine Foltz, 1 brother and 2 sisters.

Neil retired from the University of Illinois, where he worked as a laborer-electrician. He served his country during World War II in the US Navy having served aboard the USS Gilmer in the South Pacific. He was a very active member of the Immanuel Lutheran Church and he was a member of the Pesotum American Legion.

Memorials are suggested to the Alzheimer’s Association or to the Immanuel Lutheran Church.

The family would like to thank the present and past staff members of Amber Glen for taking such good care of Neil while he lived there.

Online condolences to the family may be shared via hilligossshraderfh.com